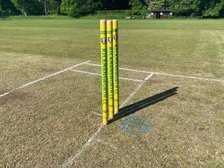 Ricky give Hatch End the Hurry Up

After a few tough games for Ricky Hatch End won the toss and asked Ricky 4s to Bowl. It was a complimentary weather for the swing, and Oh boy did the Ricky pacers prove it was a good toss to lose with a superior display of swing and seam bowling. Neil opened with Hanuman and 16 year old Rohan Oberoi against the openers A Thomson and S Lawrence. Hanuman as usual operated the offstump line allowing no width for the batsman to free their arms. Rohan, my goodness, continued to trouble the pads of the batsmen with his raw pace and eventually got one LBW in the process. Hanuman was rewarded for his line as he skittle the offstump of the other opener.

Rohan chipped in with another one with a good seam presentation uprooting the middle stump. Neil brought in Chandru and Keshav on the 11th over. They followed the footsteps of the opening spell with a good swing and seam display. Chandru banked on his swing by troubling batsmen with often outswingers and rare inswingers. He bowled G Challa with an inswinger finishing his spell with 1 for 6. Keshav (15) proved he is a like-for-like change for Rohan with his raw pace and good lines. He bowled C Clark with a good off cutter and Trapped J Gibbons who was looking good with his brilliant field setting finishing his spell with 2 for 12. How wonderful to see two Under-16s playing a leading role on the pitch.

The Scoreboard read 41-6 at drinks. A tonic to the tired eyes. Neil sensed the kill and rightly brought in Hanuman to clean up the tail. He did exactly that with his precise Inswingers once again cleaning up 3 batsmen completing his dream spell with 4 for 13. It was well supported by 19 year old Bilal Hassan from other end bowling three overs of spin with tight lines. Rohan came back and cleaned up the last batsman finishing his spell with 3 for 2. You read that right 3 for 2 in his 6 overs.

Hatch End - 50 for 10 well supported fielding by Callum and Harish. Anuj got his workout behind the stumps and was pleased it was just 26 overs and not 40.

Youngster Bilal and veteran Ubaid (Father and Son Combination) opened Cautiously for Ricky, just in case the wicket was to blame. Bilal got out cheaply but Ubaid and Harish batted sensibly by punishing the loose balls to the ropes at will. They wiped the target off in 10 overs with Ubaid unbeaten on 29 and Harish on 13. Proving the wicket was a good one, as batting first Ricky would have posted 200 at that rate.